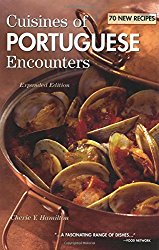 Cuisines of Portuguese Encounters is one of the first cookbooks to encompass the entire Portuguese-speaking world! Enriched by over 70 new recipes, the expanded edition is a fascinating collection of 279 authentic recipes that illustrate how Portugal and its former colonies influenced each other's culinary traditions. In the sixteenth century, Portuguese navigators circled the globe, conquering new lands to build one of history's largest empires, and at the same time carrying and introducing crops, food products, and a variety of culinary cultures to all corners of the earth. Fueled by the curiosity of a cultural anthropologist and world traveler, this fascinating collection of 279 recipes is the first cookbook to encompass the entire Portuguese-speaking world and explain how Portugal and its former colonies influenced each other's cooking traditions. The author also explores the impact of the Moors and Sephardic Jews, who added unique contributions to the culinary history of the Portuguese empire. This appetizing volume is rearranged geographically, containing staples from Portugal, Angola, Brazil, Cape Verde, East Timor, Goa, Guinea-Bissau, Macao, Malacca, and more. Each chapter is a mini-cookbook of a particular country or region, complete with introduction to the cuisine, culinary history, and recipes. From famous dishes like spicy pork vindaloo from Goa, the classic bacalhau of Portugal, and all varieties of feijoada, to lesser-known treats like Guinean oyster stew and coconut pudding from East Timor, this cookbook has something for every adventurous gastronome. The 8-page section of color photographs brings the recipes to life! Menus for religious holidays and festive occasions, a glossary of terms, a section on mail-order resources, and a bilingual index will assist the home chef in celebrating the rich, diverse, and delicious culinary legacy of this old empire.