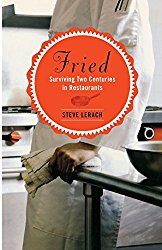 For two hundred years, a rogues' gallery of chefs, line cooks, and dishwashers have slaved away, largely unseen, to serve the dining public. Their pedigrees reach back to the first restaurants during the reign of France's Louis XVI and extend to the Delmonico brothers in New York, Escoffier in Paris, and, in Fried: Surviving Two Centuries in Restaurants, a renegade cook in Minneapolis walking like a duck with a whole, raw salmon on his head.Author and professional chef Steve Lerach first stepped through the swinging kitchen doors when he was in high school, starting as a dishwasher, and he never left. He introduces us to an old potwasher who did time for bootlegging, a stuttering Irish chef who collected funds for the bomb throwers of the IRA, and a gay Vietnam vet who found a measure of acceptance only in restaurants.Lerach humorously and poignantly interweaves restaurant legend and lore with his own experiences, exposing similarities not only of profession but of the diverse characters who work the back of the house. Though funny and simply fun to read, these tales often end in tragedy, as various actors succumb to their excesses. Lerach serves up glimpses of the hard work, camaraderie, and satisfaction that distinguish careers in what may arguably be called the world's second-oldest profession.