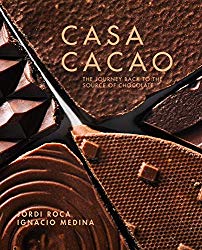 El Celler de Can Roca is the restaurant in Girona, Spain opened in 1986 by the Roca brothers: Joan, Josep and Jordi. It holds three Michelin stars and in 2013, 2015, 2018 it was named the best restaurant in the world by Restaurant magazine. Jordi Roca is currently one of the world’s most advanced chocolatiers, and was proclaimed best pastry chef in the world in the 2014, 50 Best Awards. This book shows Jordi’s search for the origins of cocoa and his journey to discover how to master chocolate for the creation of new, totally revolutionary desserts. He travels through cocoa fields in Colombia, Peru and Ecuador to meet producers both in the interior of the jungle and in the new areas that produce some of the most prestigious cocoa on the market. He learns about the nature of the so called creole cacao, native to the Amazon rainforest, the characteristics of the crop and the way in which the cocoa cob ends up being transformed into the fermented and dry bean from which we obtain our chocolate.With this background, Jordi returns to his chocolate workshop in Girona and gives a new twist to his creative work, undertaking unique creations with the cocoas that he has collected over the course of his travels through the different countries of Latin America.The book includes 40 recipes, formulas and totally new creative ideas with cocoa as the mainstay of desserts, chocolates and ice cream.A National Geographic documentary on Jordi Roca’s research into the world of cocoa in Latin America is currently being filmed.

Do you want ot get the Casa Cacao: The Return Trip to the Origin of Chocolate?

The Ultimate Student Cookbook: From Chicken to Chili
Honey From a Weed
Modernist Bread: The Art and Science
Southeast Foraging: 120 Wild and Flavorful Edibles from Angelica to Wild Plums (Regional Foraging...
Thanksgiving: Recipes for a Holiday Meal
Great Moments in Chocolate History: With 20 Classic Recipes From Around the World