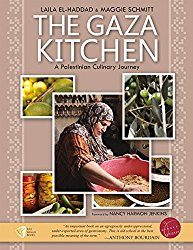 The Gaza Kitchen is a richly illustrated cookbook that explores the distinctive cuisine of the area known prior to 1948 as the Gaza District—and that of the many refugees who came to Gaza in 1948 and have been forced to stay there ever since. In summer 2010, Laila El-Haddad and Maggie Schmitt traveled throughout the Gaza Strip to collect the recipes and shoot the stunning photographs presented in the book.The Gaza Kitchen's 130 recipes codify this little-known part of the Middle Eastern culinary canon for the first time ever-- in any language. But this is not just a cookbook. In its pages, women and men from Gaza tell their stories as they relate to cooking, farming, and the food economy: personal stories, family stories, and descriptions of the broader social and economic system in which they live.Former Senior Food Writer for the New York Times Nancy Harmon Jenkins introduces the book, and Gaza's cuisine, in her very well-informed Foreword.