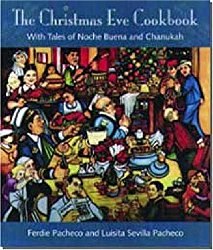 About The Columbia Restaurant Spanish Cookbook:"A double bargain since it includes both the history of an elegant and popular family restaurant and 178 recipes. . . . A must-read for all food and history lovers."--Florida LivingAbout Ybor City Chronicles:"Sometimes the most valuable memories are best labeled 'stretchers,' to use Huckleberry Finn's term. Ferdie Pacheco's nostalgic account of his childhood can confidently be called a stretcher . . . the memory of a neighborhood of family and friends inextricably tied together by custom, values, and concerns. The reader can actually see the place as he saw it."--New York Times Book Review"Reads like oral history, behind which one senses a practiced storyteller--a big, hearty, entertaining fellow who can talk about himself for hours, and does. . . . He can make you laugh out loud in a room alone."--Washington PostAbout Pacheco's Art of Ybor City:"This jewel of a book proves once again that the author is indeed a man of all seasons. . . . Recommended for inclusion in any Florida history collection and any collection of art books."--Florida Times-UnionIn this beautifully illustrated collection of nearly 200 recipes and 19 holiday stories, Ferdie Pacheco and Luisita Sevilla Pacheco create a holiday melting pot of immigrant lore and cuisine in America. The book begins in Ybor City, where Ferdie Pacheco grew up in the 1930s and '40s, an immigrant utopia of Cubans, Spaniards, Jews, and Italians in Tampa, Florida. Pacheco's own Latin heritage sets the stage for the book's focus on Christmas Eve, or Nochebuena--for Latin families often the biggest feast day of the season, when friends and family sit around a table laden with traditional dishes, telling stories that grow more colorful each year. As the Pachecos know, however, the beauty of American holiday celebrations is their rich diversity, and so they range well beyond Ybor City, collecting recipes and stories--old and new--from Cuban, Spanish, Italian, Sicilian, Mexican, and Jewish friends around the country. A master story-teller, Pacheco recounts tales that are by turns hilarious, moving, and inspiring. Known to many as "The Fight Doctor," Pacheco includes a delightful Nochebuena story about his daughter Tina and Muhammad Ali. Recipes are organized by nationality and type of food, including appetizers, salads, gravies and sauces, soups and stews, meats, game, seafood, pasta and dumpling dishes, rice and bean dishes, tamales and chili, vegetables, jellies, desserts, and drinks. Together these recipes, stories, and Ferdie Pacheco's own wonderful illustrations remind us that while no two Christmas Eve or Chanukah celebrations in America are ever quite the same, they all have in common the love of good food and a good story. The Christmas Eve Cookbook offers enough of both to make the holidays last all year round.Nochebuena storyteller Ferdie Pacheco, M.D., has worn the hats of family doctor (including a stint as Muhammad Ali’s personal physician), Emmy-winning TV boxing commentator, historian, artist, playwright, screenplay writer, and author of six books, three published with University Press of Florida--Ybor City Chronicles, Pacheco's Art of Ybor City, and, with Adela Gonzmart, The Columbia Restaurant Spanish Cookbook--and Fight Doctor, Muhammad Ali: A View From the Corner, and Renegade Lightning.Nochebuena chef Luisita Sevilla Pacheco, formerly a professional dancer, choreographer, and teacher of flamenco, is also a photographer (her work appears in Fight Doctor and View From the Corner) and a wonderful cook. She and her husband, Ferdie, live in Miami.