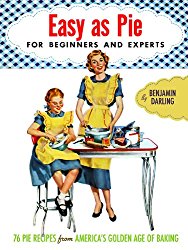 Recipe booklets and pamphlets were very popular in the first half of the 20th century and were given away as a premium to help cooks learn to use products (largely foodstuffs and appliances) to best advantage. Given that the recipes carried the brand, justified the purchase, and, if successful, encouraged repeat use of the product, great effort was made to make the best and tastiest recipes possible.  Thus recipe pamphlets contain some wonderful recipes. Pies seem somehow to be a quintessentially American dish, hence the expression “as American as apple pie” and the musical question, “Can she make a cherry pie, Charming Billy?” Pies recall a bygone age when they cooled on the kitchen windowsill and were always in danger of being stolen by hungry boys.  Easy As Pie includes all manner of pie recipes, fruit, nut chocolate and cream fillings, as well as a few pastry and piecrust recipes and tips.  Wherever possible we have striven to be faithful to the original recipe, in some cases when it seemed that the recipe was either wrong to begin with or that tastes had changed to such an extent that most would be disappointed with the result, we have made minor corrections.