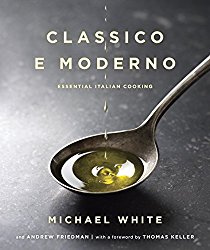 NAMED ONE OF THE BEST BOOKS OF THE YEAR BY PUBLISHERS WEEKLYHaving won or been nominated for just about every known prestigious culinary award, Michael White is hailed by food critics as the next great hero of Italian gastronomy. His reach extends around the globe with a clutch of acclaimed fine dining restaurants, including Marea, Ai Fiori, Osteria Morini, and pizzeria Nicoletta.   Now, in Classico e Moderno, White brings his passion for authentic Italian cuisine to the home kitchen, with recipes—nearly 250—that cover both the traditional and contemporary dishes of the region. In the “Classico” portion, White shares such iconic dishes as Meatballs Braised in Tomato Sauce; Pasta and Bean Soup; Cavatelli with Lamb Ragù and Bell Peppers; and Roasted Pork Leg with Rosemary and Black Pepper. The “Moderno” chapters feature recipes that have put White’s restaurants on the map, including Chicken Liver Crostini with Marsala-Braised Onions; Fusili with Red Wine–Braised Octopus and Bone Marrow; and Veal Chops with Roasted Endive and Pancetta Cream Sauce.   Both the Classico and Moderno sections offer ideas for your whole meal: first courses (Vitello Tonnato, Garganelli with Caviar Cream ), soups (Zuppa di Baccalá, White Bean Soup with Sautéed Shrimp), pastas (Tortellini alla Panna, Ricotta and Swiss Chard Tortelli), main courses (Pollo alla Diavola, Braised Lamb Shanks with Farrotto), and desserts (Crostata di Ricotta, Panna Cotta with Meyer Lemon–Basil Sorbet and Almond Milk Froth), as well as salads, pizzas, and basic formulas for pesto, stocks, and vinaigrettes. Including personal notes and anecdotes about White’s early sojourn in Italy and his flavorful career, Classico e Moderno will give you all the tools, tips, and tricks you need to cook tantalizing Italian dishes with the confidence of a seasoned chef.Praise for Michael White and Classico e Moderno   “A masterpiece of culinary acumen and perfection in presentation . . . White once again sublimely deals with his cuisine of choice—Italian. In an attempt to bridge the gap between classic and modern, this chef extraordinaire offers the reader an experience in beauty and taste. . . . This book is a testament to both the importance/influence of Italian cuisine and to the rich and varied experiences its ingredients and tradition still have to offer.”—Publishers Weekly (starred review)   “Exceedingly appealing . . . [Michael White] is one of the great chefs of modern Italian food in this country, and in Classico e Moderno he teaches us enough so that we can try to follow in his footsteps.”—Vogue   “Hugely ambitious . . . White is one of a number of rising chefs here who aren’t Italian but have felt the freedom to refresh the concept of Italian food.”—Associated Press   “The future of Italian gastronomy, thanks to the spectacular inventiveness he brings to modernizing the world’s most popular cuisine.”—Gotham“I’ve watched and tasted as Michael White has matured into his current position as one of the preeminent stewards and pioneers of Italian culinary tradition in America. Even his signature modern dishes are as relatable as the classics—and are perhaps even destined to be deemed classics in their own right some day.”—Thomas Keller, from the Foreword“Michael White has, in very short order, grabbed the Italian food crown for New York City.”—Anthony Bourdain