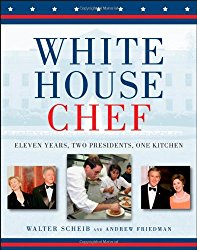 "An engaging book about life at the Executive Mansion. . . . Hillary Clinton had charged this fiercely competitive, meticulously organized chef with bringing 'what's best about American food, wine, and entertaining to the White House.' His sophisticated contemporary food was generally considered some of the best ever served there."--Marian Burros, New York TimesWhite House ChefJoin Walter Scheib as he serves up a taste--in stories and recipes--of his eleven years as White House chef under Presidents Bill Clinton and George W. Bush.Scheib takes readers along on his whirlwind adventure, from his challenging audition process right up until his controversial departure. He describes his approach to meals ranging from the intimate (rooftop parties and surprise birthday celebrations for the Clintons; Tex-Mex brunches for the Bushes) to his creative approach to bringing contemporary American cuisine to the "people's house" (including innovative ways to serve state dinners for up to seven hundred people and picnics and holiday menus for several thousand guests).Scheib goes beyond the kitchen and his job as chef. He shares what it is like to be part of President Clinton's motorcade (the "security bubble") and inside the White House during 9/11, revealing how he first evacuates his staff and then comes back to fix meals for hundreds of hungry security and rescue personnel. Staying cool under pressure also helps Scheib in other aspects of his job, such as withstanding the often-changing "temperature" of the White House and satisfying the culinary sensibilities of two very different first families.

Keto Friendly Recipes: Easy Keto for Busy People
Real Food/Fake Food: Why You Don’t Know What You’re Eating and What You Can Do about It
The Wine Bible
Mastering the Art of Japanese Home Cooking
Heavy Duty Kitchen Shears – Multi Purpose Scissors Best for: Poultry, Fish, Seafood, Herbs,...
Ancient Brews: Rediscovered and Re-created