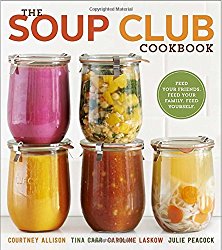 Food-sharing is the hot new thing in the "getting dinner on the table" conversation, and in The Soup Club Cookbook, four friends share not only their formula for starting a soup club--which gives you at least three meals every month when you don't have to worry about dinner--but also 150 fantastic recipes for soups and sides and storing tips for stretching those meals across the week.   The Soup Club began when four friends (who, between them, have four husbands and ten hungry kids and several jobs) realized that they didn't actually have to cook at home every night to take pleasure in a home-cooked meal. They simply had to join forces and share meals, even if they weren't actually eating them together. Caroline, Courtney, Julie, and Tina happen to be neighbors, but a soup club is for anyone: colleagues, a group of workout buddies, a book club. All you need are a few people who simply want to have more home-cooked food in their lives.In a soup club each person takes a turn making soup--and sometimes other dishes for sides or for when everyone needs a break from soup, so if a club has four people, in a month each person will have dinner delivered three times--a dish that can start as a full meal and stretch into more dinners or lunches or even morph into a sauce. Soup is forgiving, versatile, and perfect for sharing; it can be spiced to taste, topped elaborately or not at all, and dressed up or down. It travels well and reheats beautifully.  The Soup Club Cookbook also has dozens of tips for cooking in quantity and for tailoring soup to individual tastes and needs. Here, too, are simple guidelines for starting your own soup club, anecdotes, and a few cautionary tales  that will inspire anyone to share food and eat well.  Recipes include quick and easies, classics, twist on favorites, and dozens of flavor-rich new crowd pleasers:     * Carrot Coconut and Chicken Chili,    * Senegalese Peanut Soup    * Faux Ramen    * Red Lentil Curry Soup    * Potato Cheddar Soup    * Sun Dried Tomato Soup    * Jeweled Rice Salad    * Cheddar Cornbread,    * Summer Corn Hash    * Soy Simmered Chicken Wings

A Burger to Believe In: Recipes and Fundamentals
Will It Waffle?: 53 Irresistible and Unexpected Recipes to Make in a Waffle Iron
How to Bake a Pie: 37 Delicious Pie Recipes: Baking, Home Cooking, Pie Cookbook
Delicious Under Pressure: Over 100 Pressure Cooker Recipes (The Blue Jean Chef)
Taste of Home Make It Freeze It: 295 Make-Ahead Meals that Save Time & Money
Me, Myself, and Pie (The Pinecraft Collection)