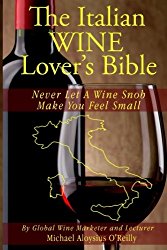 THE ITALIAN WINE LOVER’S BIBLE aims to soothe those humble and skittish beginner wine aficionados wanting to understand Italian wine. How does one comprehend a land growing 2,000 varietal wines in one million vineyards? The first rule for those on bended knee with a wish to know why they adore the wines of Italy is: Italy is a country of red wines. Much white is made but it is rarely important. Italy (the Roman Empire really) is responsible for the dissemination of the great varietals throughout the modern world. Rome, as it created empire, brought cuttings from the Greeks. The Greeks had brought cuttings from Mesopotamia. The wine drinkers of the world are the beneficiaries. Today Italy is the greatest volume producer of wine in the world. (From vintage to vintage, France can be number one.) Cheap and dear, outrageous in complex beauties or simple pleasures, the wines of Italy are exported everywhere. This book aims to elucidate for ardent emerging oenophiles (literally lovers of wine) the regions responsible for the greatest Italian reds and the producers who year after year display artistic devotion to the grapes of their vineyards. The international wine world accords Bordeaux Cabernet Sauvignon based wines as the highest expression that grapes can attain. I will argue that this is wrong. That this is an opinion foisted on us by the Brits who were the great importers, and subsequently the exporters of what they call ‘claret’—the reds of the Bordeaux region. Google and Amazon are shining examples of ‘first in their field take over the field’. So too did Bordeaux wines seize the high ground in greatness. The five Premier Cru Classé (First Growths) today attain the highest prices vintage after vintage. I will argue that several red varietals from several regions share the lofty title: Best in the World. Cabernet Sauvignon (blended with Petit Verdot, Merlot, Cabernet Franc and Malbec—the classic Bordeaux blend) will forever share the pantheon of great reds. But so too will Sangiovese, Nebbiolo, Corvina and Aglianico of Italy. And Pinot Noir from Burgundy and wherever. And Syrah and Grenache. These wines all mature into elegant, brilliant wines. The proof of which is the best? This is the task of oenophiles everywhere: to sort out through tastings of all the various vintages with friends and family. A wonderful change—that quickly rocked the wine world--began in Tuscany in the early 1970s. The Marchese Piero Antinori blended Cabernet Sauvignon with Sangiovese, the ubiquitous grape of Tuscany. This inroad into greatness happened at about the same time that Napa Valley was shocking wine lovers in the USA. Antinori began to produce Tignanello--80% Sangiovese with 20% Cabernet Sauvignon--and Solaia--80%Cabernet Sauvignon with 20% Sangiovese. Antinori’s work marked the ascension of Italian wine from cheap and ubiquitous to great…and ubiquitous. THE ITALIAN WINE LOVER’S BIBLE starts its story from the early 1970s and explores Italy’s path to greatness. The great regions and producers are explored. And so too are the varietals--both those native to Italy and those non-native varietals latterly introduced. And, yes, Italy learned from France and New World winemakers modern viticultural planting techniques and vinification inroads. Italy also began importing 55-gallon oak barrels for aging. A star was being born.