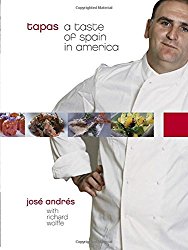 The first major Spanish cookbook in two decades, from José Andrés, recently named America’s Chef of the Year by Bon Appétit.Tapas are Spain's gift to the world of great cooking: a fresh and fun way to eat with friends and family—and easy to make at home. Using simple Mediterranean ingredients, a tapas feast is a perfect combination of little dishes packed with big flavors. Tapas by José Andrés is the first major book in a generation to celebrate this world-renowned way of eating, from a man who is the best possible authority: an award-winning Spanish chef in America, with seven highly acclaimed restaurants to his name. Recently named Bon Appétit's Chef of the Year, José is a new star in American cooking, as well as the nation's leading expert on Spanish cuisine. Having worked as a chef in the United States for two decades, he's also a thoroughly American cook who draws on American ingredients for his inspiration, and is a master at translating his native Spanish cooking for this country's kitchens. His simple and delicious recipes include:• Fish such as American Red Snapper Baked in Salt; Monkfish with Romesco Sauce; and Basque-Style Stuffed Maryland Blue Crabs• Chicken including Catalan-Style Chicken Stew; Chicken Sautéed with Garlic; and Chicken with Lobster• Pork such as Chorizo Stewed in Hard Cider; Figs with Spanish Ham; and Roasted Pork Tenderloin with Apples • Rice dishes including Lobster Paella; Black Rice with Squid and Shrimp; and Traditional Rice with Clams All these recipes are full of tremendous flavor and creativity, as well as in-depth ingredient notes and a rich atmosphere that will transport you to the lush countryside, hip cafés, and sun-drenched coasts of Spain—and back again to dinner at home. This is a breakthrough cookbook from an extraordinary chef.

A Beautiful Bowl of Soup: The Best Vegetarian Recipes
Sushi Made Simple: From classic wraps and rolls to modern bowls and burgers
Cookin’ With Beans and Rice
Roasting Tray Magic: One Tin, One Meal, No Fuss!
Nourishing Broth: An Old-Fashioned Remedy for the Modern World
Cooking in Cast Iron: Inspired Recipes for Dutch Ovens, Frying Pans, Grill Pans, Roaster, and more