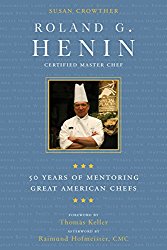 Certified Master Chef Roland G. Henin has been our nation's top culinary mentor for the past fifty years, training such prestigious chefs as Chef Thomas Keller of French Laundry and Per Se and Certified Master Chef Ron DeSantis. For the first time, his story is being told―from his own perspective and through the lens of some of America’s most prominent chefs. Read about how Certified Master Chef Rich Rosendale was inspired by Henin to turn a decommissioned nuclear bunker into a training kitchen. Discover Thomas Keller’s motivation for becoming a chef―a philosophy he learned from Henin. This fascinating memoir includes more than fifty interviews from mentees and colleagues who were shaped in some way by Chef Henin. Full of humorous anecdotes and behind-the-scenes glimpses into the elite culinary world, this is a rare and fascinating look at the life and legacy of a culinary genius. Chef Henin was among the first European chefs to cross the Atlantic and bring classical cuisine to American culture. Pioneering chefs like Roland Henin and Jean-Jacques Rachou were subversive radicals of their Old World. You won’t be disappointed by this unique memoir. As Chef Henin says, “If it’s worth doing, it’s worth doing right.”