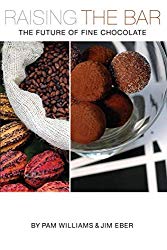 "Just give me all your chocolate and no one gets hurt!" Billions of us worldwide understand what it means to scream those words. We feel lost-even unhinged-without chocolate's pleasures. And if chocolate is the music that makes our days brighter, fine chocolate is the symphony-the richest, most complex form in the chocolate universe. The most important movement in that symphony's centuries-old existence is now beginning. And that future is... what? A world of gray monochromatic flavor, or one rich with a rainbow of flavors that capture the myriad pleasures and diversity of the cocoa bean? In the spirit of Michael Pollan's The Omnivore's Dilemma, Raising the Bar: The Future of Fine Chocolate tells the story of what that next movement in the fine flavor chocolate symphony might hold. Told in four lively parts covering everything from before the bean to after the bar-genetics, farming, manufacturing, and bonbons-the book features interviews with dozens of international stakeholders across the fine flavor industry to consider the promises and pitfalls ahead. It looks through what is happening today to understand where things are going, while unwrapping the possibilities for the millions and millions of us who believe that life without the very best chocolate is no life at all.Part OneSeeds of Change: Genetics and FlavorThe genetic story of the future of flavor cacao told through discussions with researchers, scientists, and experts around the world who are involved at the genetic level: from the mapping of the cacao genome to the Heirloom Cacao Preservation Initiative (HCP). The HCP seeks to connect flavor to genetics to the work being done on the ground in order to confront the spread of low-flavor beans and ensure cacao quality and diversity for future generations.Part TwoFrom the Ground Up: Farmers, Farming, and FlavorDiscussion of the issues of growing cacao from an ecological and sustainable perspective given the reality of where it is grown. Interviews and stories cover the majority of fine flavor growing regions and myriad efforts to add value and values to fine flavor chocolate; preserve, protect, and propagate flavor cacao for the future; and ensure that the beans are as good as they can possibly be. The realities and possibilities of fair trade chocolate and the work being done on fermentation are also covered.Part ThreeTo Market, To Market: Craftsmanship, Customer Education and FlavorCan consumers learn to slow down, taste, explore, and value the costly complexity of fine chocolate? Though the future looks bright by some measurements, sometimes the numbers aren't what they seem... Discussions with both artisan and traditional chocolate manufacturers around the world on how they see the market and sources for fine flavor beans and what they are doing to educate their customers about their craft, including a survey of the nature of raw, organic, and functional chocolate.Part FourPerforming Flavor: The Art of the ChocolatierWhether watching over those creations, traveling the world to discover new pairings, or simply taking their love of Junior Mints to the highest level, the worl''s fine flavor chocolatiers are all deeply aware of the "stage" they work on and the importance of taste in every performance. The future of their creations-the most flavorful and beautiful bonbons and confections in the world-are discussed as these chocolatiers confront the issues surrounding the preservation of their craft and how they see their flavors and recipe development changing (or not) in the future.