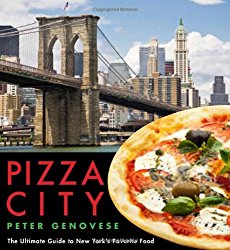 Pizza is a $35 billion a year business, and nowhere is it taken more seriously than New York City. Journalist Peter Genovese surveys the city’s pizza scene—the food, the business, the culture—by profiling pizza landmarks and personalities and rating pizzerias in all five boroughs.In this funny, fascinating book, Genovese explores the bloggers who write about New York pizza, the obsessive city dwellers who collect and analyze the delivery boxes, Mark Bello’s school where students spend a day making pies from scratch, and Scott Wiener’s pizza bus tours.Along the way, readers learn the history of legendary Totonno’s on Coney Island (Zagat’s number-one pizzeria for 2012), along with behind-the-scenes stories about John’s on Bleecker Street, Joe’s on Carmine, Lombardi’s, Paulie Gee’s, Motorino, and more than a dozen other favorite spots and their owners. Throughout these profiles, Genovese presents a brief history of how pizza came to the city in 1905 and developed into a major attraction in Little Italy, a neighborhood that became a training ground for many of the city’s best-loved pizzerias. Enjoyable facts and figures abound. Did you know that Americans put 250 million pounds of pepperoni on their pies every year? Or that Domino’s has more outlets per capita in Iceland than in any other country?Beyond the stories and tidbits, Genovese provides detailed, borough-by-borough reviews of 250 pizzerias, from simple “slice shops” with scant atmosphere to gourmet pizzerias, including shops that use organic ingredients and experiment with new variations of crusts and toppings. Complemented by hundreds of current and never-before-seen archival photos, the book gives the humble slice its proper due and will leave readers overwhelmed by a sudden desire for New York pizza.