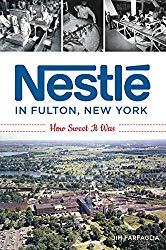 In 1898, Switzerland's Nestlé Company was searching for a location to build its first milk processing plant in the United States. Upstate New York's bountiful dairy farms sealed the deal for a factory in Fulton. Soon another Swiss company requested space at the factory to produce a confection that had taken Europe by storm: the milk chocolate bar. Over the next century, factory technicians invented classic treats including the Nestlé Crunch Bar, Toll House Morsels and Nestlé Quik. With 1,500 workers churning out 1 million pounds of candy per day, Fulton became known as the city that smelled like chocolate. Author Jim Farfaglia recounts the delectable history of Nestlé in Fulton.

Do you want ot get the Nestlé in Fulton, New York: How Sweet It Was?