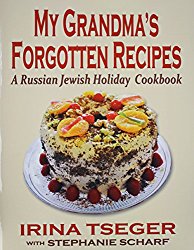 Over 100 pages of the BEST and ONLY Russian-Jewish recipes you'll ever need, with 80 full-color illustrations. These recipes highlight cooking traditions from the five holidays that are most commonly observed by Jews in the 21st century: Rosh Hashanah, Yom Kippur, Succot, Chanukah, and Passover. Because many recipes are not as well known today as a generation ago, photographs are used liberally to illustrate the various phases of complicated dishes. Each recipe has been kitchen-tested by Americans who had never before prepared the dishes to ensure that the recipe was useful to even the most inexperienced cook. Irina remembers her childhood home filled with the smell of vanilla and cinnamon and says putting love into your cooking makes it appetizing and so much better tasting!