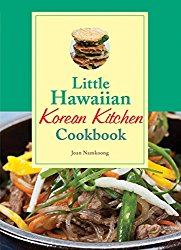 The best of from A Korean Kitchen. Kalbi, kimchi, meat chon and mandu are some of the delectable Korean dishes we love in Hawaii. But did you know that some of these dishes are unique to Hawaii in the way they are prepared and served? Food writer Joan Namkoong, a second generation Korean American, draws on her island heritage to explain the Korean kitchen in Hawaii, distinctly different from a Korean kitchen in Korea. The ingredients, the seasonings, the textures, and flavors in Hawaii bear the history of Korean immigrants who came to the islands in the early 1900s. Succeeding generations and more recent immigrants have put their mark on Korean food in Hawaii, a popular cuisine that has evolved over the past century. Korean food is a healthy cuisine that relies on many vegetables, grains, fermented foods, and simple cooking techniques that require little fat. Meats are served as a small part of this vegetable-centric cuisine that focuses on many tasty side dishes on the table. It s a cuisine islanders love for its robust flavors and varied dishes.