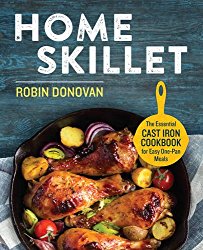 Your Cast Iron Cookbook for Effortless Meals in the Only Pan You Need It’s no secret that cooking at home is typically healthier and more frugal than going out to eat or ordering delivery. Yet for many of us, there simply aren’t enough hours in the day. Enter the cast iron skillet―the most underestimated tool of the culinary world. Home Skillet is your cast iron cookbook for one-pan meals every night of the week. Crispy crusted casseroles, impeccably seared steaks, cakes baked to perfection―cast iron cooking whatever you want, whenever you want it, has never been easier or more satisfying. Food writer Robin Donovan became an instant fan of cast iron cooking because of its ease and versatility―plus, it gets better the more you use it! Home Skillet is the complete cast iron cookbook, making the best use of this multi-functional pan while keeping mealtime quick and affordable. Inspiration strikes hot―100 recipes specifically designed for simple cast iron cooking and variety for every meal Everyday ease― Quick and Easy labels call out recipes that finish in under 30 minutes Don’t sweat it―Invaluable tips and hacks for cast iron care to ensure your skillet will serve you for many one-pan meals to come Finally, a cast iron cookbook that makes every meal an easy meal! One Big Cinnamon Roll * Southwestern Savory Corn Cakes * Blackened Fish Tacos * Skillet Pizza with Shaved Asparagus * Spiced Lamb Burgers * Rhubarb Skillet Pie