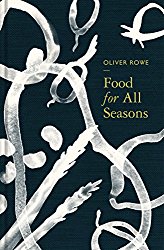 A story of seasonal food throughout the year, this is a touching and informative culinary journey exploring the way our lives and our food are intertwined. It's a book of recipes, but more than that it's a book about food, and a book about an extraordinary chef whose career spans nearly two decades. Oliver Rowe has cooked at the highest level and in this book, he draws on his wealth of experience to bring seasonal food to life. Oliver Rowe first learned to cook in Tuscany and trained at the award-winning Moro. He was Head Chef at Maquis in London'd Hammersmith and, after a short stint in Paris at Rose Bakery, went on to open his cafe, which he called Konstam after his grandmother.He featured in BBC2's "The Urban Chef", which focussed on his search for local suppliers to provide high quality, seasonal produce for his restaurant. Since then he has worked in various kitchens around the world including Chez Panisse in Berkeley, California.In this book Oliver takes his knowledge and applies it to local, seasonal eating. Divided by Season, this book is the perfect accompaniment to any cook's colletion. It will provide inspiration for using seasonal meat and produce in creative and tasty ways.