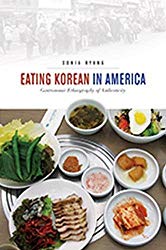 Can food be both national and global at the same time? What happens when a food with a national identity travels beyond the boundaries of a nation? What makes a food authentically national and yet American or broader global? With these questions in mind, Sonia Ryang explores the world of Korean food in four American locations, Iowa City, Baltimore, Los Angeles, and Hawaii (Kona and Honolulu). Ryang visits restaurants and grocery stores in each location and observes Korean food as it is prepared and served to customers. She analyzes the history and evolution of each dish, how it arrived and what it became, but above all, she tastes and experiences her food―four items to be specific―naengmyeon cold noodle soup; jeon pancakes; galbi barbecued beef; and bibimbap, rice with mixed vegetable. In her ethnographic journey, Ryang discovers how the chewy noodles from Pyongyang continue to retain their texture and yet are served differently in different locales. Jeon pancakes become completely decontextualized in the United States and metamorphosed into a portable and packable carry-out food. American consumers are unaware of the pancake's sacred origin. In Hawaii, Ryang finds that it is the Vietnamese restaurant that serves unexpectedly delicious galbi barbecued meat. Intertwined in the complex colonial and postcolonial contexts, Korean galbi and Japanese yakiniku can be found side by side on the streets of Honolulu frequented by both the locals and tourists. In writing Eating Korean in America: Gastronomic Ethnography of Authenticity, Sonia Ryang is as much an eater as a researcher. Her accounts of the cities and their distinctive take on Korean food are at once entertaining and insightful, yet deeply moving. Ryang challenges the reader to stop and think about the food we eat every day in close connection to colonial histories, ethnic displacements, and global capitalism.

The Great British Bake Off: Get Baking for Friends and Family
Great British Bake Off: Christmas
Eat Real Vietnamese Food: A Step by Step Guide to the Classic Cuisine of Vietnam
Mark Bittman’s Kitchen Express: 404 Inspired Seasonal Dishes You Can Make in 20 Minutes or ...
Easy Cast Iron Skillet Recipes: The Best Iron Skillet Meals Cookbook
How to Make a French Family: A Memoir of Love, Food, and Faux Pas