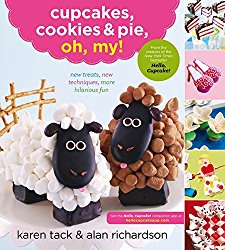 Two million copies later, the New York Times best-selling authors of Hello, Cupcake! and What’s New, Cupcake? are back, applying their oversized imaginations not just to cupcakes but to cookies, pies, cakes, and other treats. Hello, Cupcake! inspired millions to become cupcake artists and launched an international sensation. Now the talented pair who started it all returns, with projects that are more hilarious, more spectacular, more awe-inspiring—and simpler than ever. But they don’t stop at cupcakes. No sweet treat is safe from their ingenuity: refrigerator cookies, pound cakes, pie dough, cheesecakes, bar cookies, and Jell-O are all transformed into amazing and playful desserts. There’s something for everybody in this book, and every single item you need can be found in the neighborhood supermarket or convenience store. Playing with your food has never been so exciting—or so easy. Karen Tack and Alan Richardson have appeared on TV with Martha Stewart, Rachael Ray, and Paula Deen and have been featured many times on NBC’s Today as well as in America’s top magazines.

Breakfast, Lunch, Dinner. Life: Recipes and Adventures from My Home Kitchen
The Nerdy Nummies Cookbook: Sweet Treats for the Geek in All of Us
Desserts from the Famous Loveless Cafe
Fat Witch Brownies: Brownies, Blondies, and Bars from New York’s Legendary Fat Witch Bakery
The Magic of Mini Pies: Sweet and Savory Miniature Pies and Tarts
Flower Cake Bundtlette Pan For Use With 3,5,6 AND 8 Qt. Pressure Cooker And Oven baking