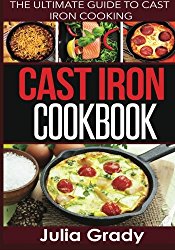 Cast Iron Cookbook: The Ultimate Guide to Cast Iron Cooking The cast-iron skillet is an icon of American cooking and has been used for centuries by cooks who understand its many advantages. You may have memories of your grandparents cooking meals in cast iron pans. In fact, since cast iron will last for generations, you may have those very same pans in your kitchen today! Everything You Need to Know about Cast Iron Cooking This book is the ultimate guide to cast iron cooking, from choosing the right pans, to seasoning them properly, to how to properly clean and store them. In addition to learning the basics of cast iron cooking, the book also includes an abundance of delicious recipes that are specially suited to the benefits of cast iron. From perfectly cooked bacon and pancakes on the griddle to seared steaks and crispy fried chicken to mouthwatering desserts, The Cast Iron Cookbook: The Ultimate Guide to Cast Iron Cooking has you covered. 70 Delicious Recipes Created Just for Cast Iron Including: Dutch Apple Pancake Easy Sausage Gravy and Biscuits Chocolate Chip-Banana-Pecan Pancakes Italian Grilled Cheese Deep-Dish Sausage and Mushroom Pizza Perfect Pan-Seared Steak Sausage, Apple, and Cabbage Skillet Chicken and Pepper Fajitas Classic Cornbread Pineapple Upside Down Cake Fudgy Skillet Brownies And more ... Get your copy and let's get cooking!