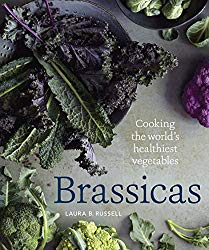 A cookbook showcasing 80 recipes for the most popular of the world's healthiest vegetables--kale, cauliflower, broccoli, brussels sprouts, cabbage, leafy greens, and more--tailored to accommodate special diets such as gluten-free, dairy-free, vegetarian, and vegan.For a long time, brassicas had a mixed reputation. While a small group of people staunchly adored them, most Americans were not as fond of the vegetables formerly known as "cruciferous" (who doesn't remember a plate of stinky boiled cabbage or President Bush's condemnation of broccoli?). But in recent years, a transformation has occurred. Kale has taken the world by storm and there's hardly a restaurant left that doesn't have cauliflower on the menu. The rising popularity of brassicas is not only due to their extraordinary health benefits and "superfood" status, but also the realization that they can taste delicious when properly prepared. Brassicas shows home cooks how to bring out the flavors of these vegetables without death-by-boiling or burial under a blanket of cheese. When roasted, Brussels sprouts reveal an inherent sweetness. Watercress and arugula add a delightful peppery punch to salads. Caramelizing cauliflower in the sauté pan brings out its best attributes. Celebrating natural flavors rather than masking them, Brassicas both inspires cooks as well as arms them with appetizing new ways to increase their vegetable consumption.