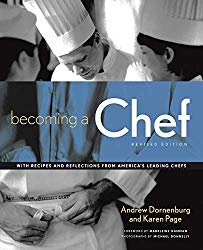 "An extraordinary book...There's never been a book like this before." --David Rosengarten, FOOD NETWORK (1995)   The book that first kicked off the boom and established the category of contemporary writing on food, BECOMING A CHEF  -- written by Manhattan restaurant chef Andrew Dornenburg and his Harvard MBA wife Karen Page -- was published during the summer of 1995 with extremely modest expectations:  Its initial printing was a mere 2500 copies.  Yet its first-time authors were interviewed by Matt Lauer on the "Today" Show, and BECOMING A CHEF went on to be hailed for launching "a new dimension in food writing, creating a standard for a whole new genre" (The Record).    "When Julia Child sends a congratulatory note on your recently published book and says she keeps her copy by the bed, you've done a good job...[BECOMING A CHEF] is a comprehensive primer on the culinary profession...a combination of brass tacks and philosophy." --Mary O'Neill, THE DETROIT NEWS (1995)   By December 1995, BECOMING A CHEF "proved a surprisingly popular gift item" (Forbes), and the book was soon recommended or required reading at schools ranging from The Culinary Institute of America to Wesleyan University.  The following spring, the book won the 1996 James Beard Book Award for Best Writing on Food -- and this cult classic (Restaurants & Institutions) was on its way to sales of more than 100,000 copies.    Many culinarians have cited BECOMING A CHEF as a life-changing book that first confirmed their interest in a culinary career.  Others were inspired by its future-focused final chapter on food safety and purity, and the book's contention that "chefs cannot remain unmoved by these changes."  BECOMING A CHEF's place in culinary history has been marked in timelines published by the National Culinary Review, which noted its 1995 publication as a key milestone for providing "the first compendium of answers to some of the most common questions an aspiring chef can ask."