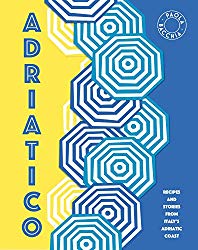 A beautifully crafted cookbook that charts the food traditions in the towns that skirt the coastline of Italy’s striking Adriatic Sea.The food of Italy’s eastern coastline mirrors the memories and traditions of peoples past and present who have lived on the shores of the Adriatic, with ingredients reflecting the climate and terrain—of course with seafood in abundance, as well as an array of incredible pasta, rice, polenta, and meat dishes.The Adriatic coastline runs from the heel of the boot-shaped peninsula at the Ionian Sea, through Puglia and Venice, to the northern waters of the Gulf of Trieste on the border with Slovenia. Along its length are rugged rocky coastlines, sandy stretches of beach, lagoons, and wetlands. Spindly wooden fishing piers, white washed walls, colorful villages, and sea-facing piazzas dot the 750-mile coastline with a rich history touched by Etruscan, Greek, Roman, Venetian, and Austrian populations.Join Paola on this beautiful journey where she travels the length of this relatively unexplored coastline, to find ancient food traditions still thriving.

Do you want ot get the Adriatico: Recipes and stories from Italy’s Adriatic Coast?

Arzak Secrets
Martha Stewart’s Cookie Perfection: 100+ Recipes to Take Your Sweet Treats to the Next Level
Cookies for Kids’ Cancer: Best Bake Sale Cookbook
Mastering the Art of French Cooking, Vol. 2: A Classic Continued: A New Repertory of Dishes and T...
Our Cuisinart 3-in-1 Burger Press Cookbook: 99 Stuffed Recipes for Your Non Stick Hamburger Patty...
Comfort Food Shortcuts: An “In the Kitchen with David” Cookbook from QVC’s Resi...